2010 has been a year of travel for me. I spend a minimum of one weekend out of town, if not two. The past four days, I have been in Philadelphia – a city responsible for many things I am found of, including but not limited to the show It’s Always Sunny in Philadelphia…ok so that’s the only immediate thing that comes to mind.

Everyone is so friendly in Philly, except for – ironically – the girl at Starbucks who wouldn’t change my $20 bill. Really? Next time, I’m paying with a $50 and you better get some small bills because I want ones. I didn’t fly all the way from Seattle to go to Starbucks and have you be rude to me. I’m telling Howard.

To start, we rented a car – because 1) it’s paid for by my company and B) rental cars provide for endless hours of comical relief. This time around we got a Nissan Versa which is similar to a matchbox car but with less power. It’s the same size as a Hybrid, has the same horrible pickup and sounds exactly the same. Yet, it is not a Hybrid. In theory, it’s a waste of a car. Per my usual, I declined the insurance because I am “economical,” sure let’s call it that, and overly confident I won’t get into an accident.

For the record, additional insurance is probably statistically a good idea. I thought I was aggressive driver. Enough so that I could handle Philly and Jersey – combo pack! – without peeing myself. False. Driving a matchbox that whirs when accelerating on the on-ramp, while also checking my blind spot to make sure I don’t get run over like Mario Kart creates all sorts of panic within.

While chugging my Americano (appetite suppressor + mood accelerator = bliss) and stopped at a light, the Queen o’ Sportscenter and I were exchanging our typical useless conversation. Really, nothing we every say is funny except to us, but we banter continually. The light turned green, and whaddaya know, I hit a pothole hence spilling my venti all down my front.

Me: DO SOMETHING?
QoSC: What do you want me to do?

Coffee drips down my jacket

Still driving because it’s an on-ramp, and I can’t stop.

So she grabs the wheel. Obviously, of all the things I am holding the wheel is the most convenient. Not the coffee that I’m holding in the hand closest to her. Hell, she could have wiped the coffee of my boob (freebie!) and I wouldn’t have cared. Meanwhile, a crazed Phillies fan with a car that had real horsepower – probably a Ford – came up fast on my left.

QoSC: OMG look out!
Me: DO SOMETHING!

To be honest I was so concerned that my favorite jacket was absorbing my Sbucks to think of a different phrase. Clearly, verbalizing myself wasn’t going well and I was secretly hoping she would read my mind. Jedi.

(Also, did you know after you pass through a toll, there are no lanes? NO LANES. It’s one big fishbowl of cars with either NJ or PA plates, again with actual horsepower, racing for the exit. For a girl that cries, I am not sure how I made it out without tears.)

In addition to the driving escapades, we also decided it best to create a word – just in case people didn’t already think we had twinsies-terrets. They do now. We spent so much time saying “MOOP” that I am guessing they thought we were saying “poop.” (Philly isn’t the cleanest place.)

Moop = Man on Stoop. We made it our personal goal to find as many stoop-sitters as possible while driving from South Philly to City Center. Mostly because movies tell us that people sit on stoops on the East Coast.

As we are college graduates (four years, in a row), we had to go out at least one night in Philly. And being advocates (read: cliché tourists) of It’s Always Sunny we of course went to Mac’s – a pub owned by Rob McHellerny and his wife, Sweet Dee. It was here that I made the strongest $10 investment of my life. For $15, we had the opportunity to purchase a Philly foam hat, and get a free beer! with said purchase.

I was never a strong negotiator. I show emotion too quickly. Dangit.

Needless to say we ended up with said fantastic hats. See photo below. They are shaped like bells, with giant cracks, and say “RING IT.”

Later, after refusing to wear hers all night, the Q o’ SC gave hers to a homeless man who proceeded to try and bum a smoke. At least he got a new pillow. 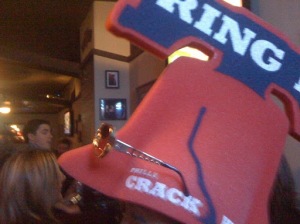 PS: yes, that does say ‘Crack Head.’ Glasses not included.

I’LL TELL YOU WHAT

Read it once, read it again